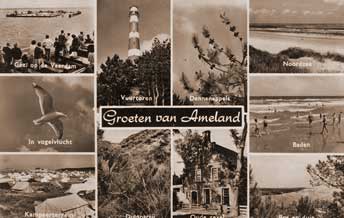 The first inhabitants of the island were nomads who were busy with cattle farming, hunting, fishing, and collecting berries and herbs. It is thought that they settled on Ameland about 750 AD. From the Middle Ages small settlements were established behind the dunes on the high sand, which protected the people from storm tides. Early foundations have been found beneath the Dutch Reformed Church in Hollum from 1100 AD. Ameland was independent in those days, but it was always a cause for arguments between governors, and between governors and the Ameland people. In 1424, Ritske Jelmera of Cammingha began acting as the representative of the Ameland people. Later this person got the title of Lord of Ameland. The family managed to keep the rule of Ameland until the male line died out in 1681. The island was transferred to in-laws: Thoe Schwartsenberg and Hohenlandsberg. This family died out as well in 1704 and the island was sold for over 77,000 euros to the heir stadtholder of Friesland: Johan Willem Friso Prince of Orange. However, they did not enjoy their purchase for long, as the family lost the island in 1810, during the French Revolution. Afterwards it came into the possession of the province of Friesland and it still is their property. 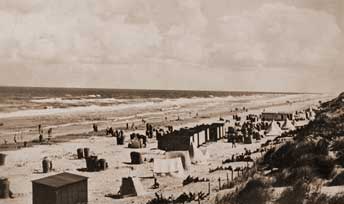 When people settled permanently on the island, small farms were established that became an important means of life. Provisions for the primary necessities of life were taken care of: inhabitants had some cattle and they lived off crops and fishing. These were called Marktgenootschappen (‘market associations’): social units with their own administration and rules. In the seventeenth and eighteenth centuries, a new source of income was introduced: whaling. Between March and May large sailing ships started their journeys to Spitsbergen (now Svalbard). There they went hunting and as soon as they had spotted a whale, the bravest men went to it in a rowing boat. The whale was pierced through with a harpoon by the strongest man and after a long war of attrition the whale was pulled to the mainland. Here the usable parts (fat and whale-oil) were cut off the whale and prepared for the journey back. This difficult journey was very dangerous and consequently it did not always end well. The best-known story is that of whaler Hidde de Kat. In 1777, he went to Greenland, where his ship got stuck in the Arctic ice. The crew was forced to stay on an ice floe. Many crewmen who had gotten into the same situation did not survive. But Hidde de Kat decided, when they had run out of food, to proceed on foot. The journey lasted for days on end and only 18 of the 51 crewmen had survived when they reached Greenland. These men spent the winter with the eskimoes and returned to Ameland 1.5 years after they had left for the Arctic. This desastrous event marked the end of whaling for Ameland. The inhabitants then started focussing on farming, fishing and cattlebreeding for personal use. Nowadays, especially this last sector is well-represented on the island, with 110 cattle farms and 70,000 sheep. 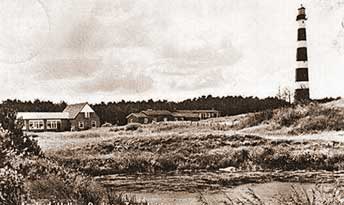 This was introduced as a manor coat of arms at the end of the sixteenth century. The weapon is split in two vertically; the left part has a golden base with three diagonal black bars from top left to bottom right. The right part is azure with a silver waxing moon. The origin of the coat of arms is obscure. According to a folk tale, the diagonal black bars represent beams, which the Ameland people had stolen on Terschelling in order to make a gallows out of them. A well-known rhyme still survives that tells this story. 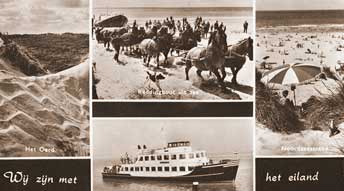